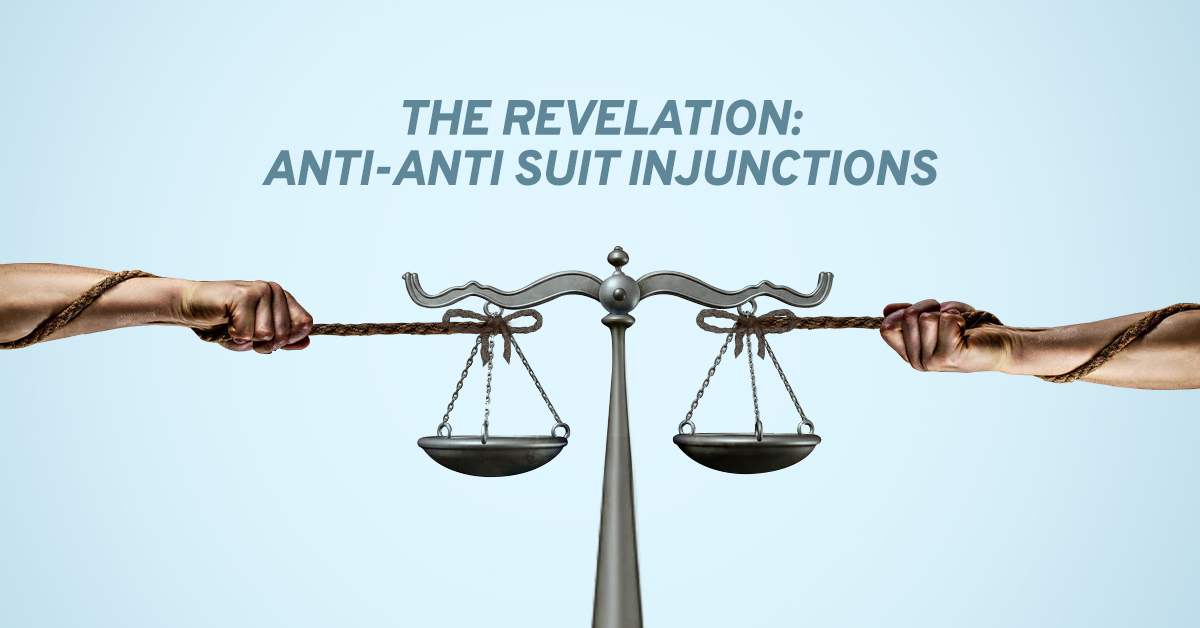 “Law is an aspiration for change and the answer one gets are based on how the discourse is framed.”

After Covid19, the business conglomerates and companies are expanding their global outreach in multiple nations and when the expansion of business is rapid, the issues/conflicts of any nature are bound to happen. Hence, it is imperative for any country today, to provide a strong and robust justice delivery system that provides an assurance of FOREIGN ENTITIES to conduct their business in their countries with a hope that the justice shall be served. Hence with rapid expansion and globalization, scope for law suits involving foreign courts and cases in relation of Intellectual Property have increased exponentially. In this scenario, Anti-suit and anti-enforcement injunctions are gaining popularity around the world, including India. Recently, the first case of Anti-anti-suit injunction given by Delhi High Court in India. To understand this concept, we have to first understand the concept of anti-suit injunction and its relation to Litigation and Intellectual property.

Anti-suit injunctions are explained as- When a court restrains a party to a suit/ proceeding before it from instituting or prosecuting a case in another court including a foreign court, it is called anti-suit injunction. An anti-suit injunction order is issued against a party in personam, preventing them from filing a lawsuit or continuing with one that has already been filed. This injunction can be granted in both domestic and international court proceedings. However, having regard to the rule of comity or “Comity of Courts” (the principle in accordance with which the courts of one state or jurisdiction gives effect to the laws and decision of another, not as a matter of obligation but out of deference and respect), the power of giving anti-suit-injunctions will be exercised sparingly because such an injunction though directed against the person, in effect causes interference in the exercise of jurisdiction by another court as laid down by Hon’ble High Court in the case of Modi Entertainment Network & Anr vs W.S.G. Cricket Pte. Ltd.

Another case of HT Media versus Brainlink International was filed. Brainlink, a New York-based company with the domain name www.hindustan.com, was infringing on HT Media’s “Hindustan” and “Hindustan Times” trademarks. Even after receiving a legal notice from the Delhi High Court ordering Brainlink to stop using the trademarks “Hindustan” and “Hindustan Times,” HT Media claimed that the company showed its malice by not only quoting USD 3 million for selling the domain name to HT Media, but also secretly filing a declaratory suit for non-infringement against HT Media in US District Court. HT Media requested an ex-parte ad-interim injunction against Brainlink as well as an anti-suit injunction to prevent Brainlink from pursuing any further legal action in the United States District Court because it was oppressive. The Delhi High Court used the principle established in the Modi Entertainment case to determine whether the forum conveniens is the Delhi High Court or the US District Court. It was finally discovered that HT Media had established a prima facie basis for an anti-suit injunction. The court barred Brainlink from continuing with the lawsuit in United States.

ANTI-ANTI SUIT INJUNCTIONS – A Step ahead of Anti Suit Injunction:

Now in India, in the case of Interdigital Technology Corporation and Others vs. Xiaomi Corporation, the Delhi High Court issued India’s first ever interim anti-anti-suit injunction (AASI). In the Xiaomi Case, the defendant-Xiaomi was successful in securing a global anti-suit injunction against the plaintiff from the Wuhan Intermediate People’s Court (Wuhan Court) before the Delhi High Court.

KEY TAKEAWYAYS FROM THE ABOVE JUDGEMENTS:

In recent times, as global approach of companies is increasing, there are more chances of parties filing frivolous, vexatious and oppressive law suits, as happened in Interdigital vs. Xiaomi, to prevent themselves from adjudication in Indian Courts. The Delhi High Court through granting an Anti-Anti-Suit Injunction in Interdigital vs. Xiaomi has set a new benchmark for Indian Jurisprudence. It should be a welcome step for Indian litigants as this revelation has set a new tone of precedents for Indian courts. But as mentioned previously by High court that this power should be used sparingly and in matters where the refusal of injunction may result in palpable and gross injustice in the meanest sense. Hence, it will most definitely contribute significantly to Indian as well as international jurisprudence.

The blog has been written by Mr. Pratik Chaudhari (Partner – Litigation) and assisted by Ms. Prerna Khatri (Intern).

Pratik Chaudhari is a Partner at Y.J. Trivedi & Co., Ahmedabad, India. He has been with the firm since 2015. Pratik holds a degree in Master’s in Pharmacy (M. Pharm) coupled with Master’s degree in Business Law (LL.M) and Diploma in Patent Law from NALSAR University, Hyderabad. As a Partner in Litigation, he has played a pivotal role in variety of Intellectual Property Law Cases ranging from Trademark infringement to breach of trade secrets, confidentiality agreements and Patent Infringement cases in various courts across India.