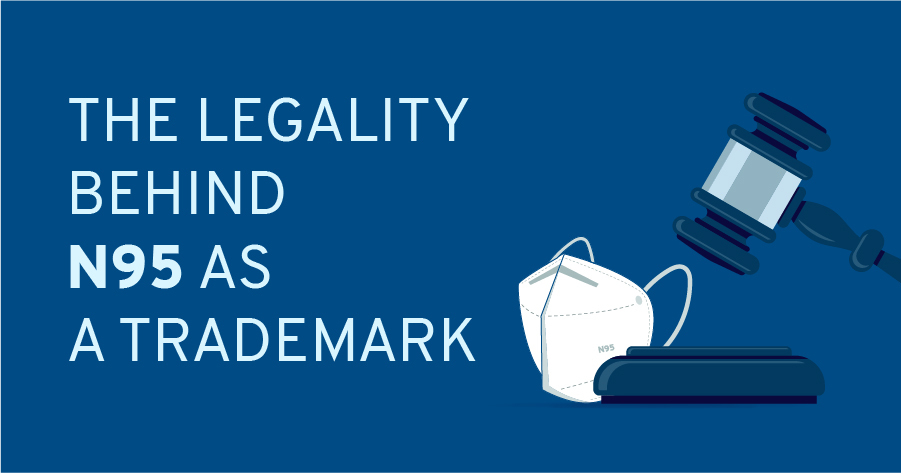 The Legality behind N95 as a Trademark

N95, Where N stands for “not resistant to oil” and a capability of filtering out 95% airborne particles, a term and technology we know was adopted and invented in 1970s when Sara Little Turnball invented this phenomena and which was introduced in the market by the giant company 3M, but this know-how came into such vast use and on tip of every human being, only in 2020 during this Covid-19 Pandemic period. In this Blog, I will be discussing about the word N95 as a trademark and the recent update in the legality and status of N95 in India.

Recently, IPAB, Delhi Bench, issued an order by passing interim stay to the operation of the registration No. 4487559 in class 10 for the mark N95(word per say) in the matter ORA/171/2020/TM/DEL, where the Petitioner filed for the rectification of the mark N95 which was registered under the name of the Respondent Mr. Sanjay Garg.

But, before we proceed further with the in depth of this matter, I would like to point towards the notification by the government issued on 13th March 2020, where the Government notified that masks are under the essential Commodities Act, including the N95 ones. But the point of truth also points in the direction of the fact that there is no implementation of any corresponding Indian Standard for these masks which means that the mask can be sold in India without complying with the Indian Standard.

Coming over the issue of the Rectification Application in ORA/171/2020/TM/DEL, the Respondent Mr. Sanjay Garg, is the registered proprietor of the mark N95 which leads us to the conclusion that “a registered proprietor of a mark can prohibit the infringers from copying and using their mark”. This rectification matter was initiated when the Petitioner, who was selling the N95 tagged mask on Amazon Platform, received the mail from the Amazon, when he got to know that his goods of N95 masks have been removed by the platform apparently on the complaint filed on behalf of the Respondent.

Through this matter, IPAB passed the order that N95 is a generic mark and no one can claim monopoly over any generic mark. According to me, the whole issue, not only revolves around the registration and protectibility of a generic term but also it points towards the glitch in the Trade mark Registry as well. IPAB through this order stated that “Generic terms cannot be registered under the trademark law and no protection to proprietor is provided. If any word is to be adopted as a trademark it cannot be a term that is primarily understood by people referring to a product category.” Its always the primary significance of the registered mark to the relevant public” shall be the test for determining whether the registered mark has become generic to goods or services. Relying on the principle laid down by the board that a generic term is only entitled to protection on the ground that it had acquired a distinctive character in the minds of customers and have acquired a well known status and thus in general, generic term is not entitled to protection (Cadilla Healthcare Ltd V/s Gujarat Co-operative Milk Marketing Ltd and Ors, 2009 (41)(PTC 336 (Del.) Further recently, in case of ITC Ltd. v. Nestle India Limited C.S. No. 231 of 2013, 2020 SCC Online Mad 1158, the court has clearly stated that a monopoly cannot be created over laudatory expression. Therefore, in this case as well, N95 is a generic term in the mask industry and the same is not capable of being neither registered or protected as trade mark nor the same appropriated by any one entity. Talking in detail about the Respondent No. 1 in the present matter and not to negate the immodest act by the Respondent who got the false registration and further also tried to stop the sales and restrict the sell of N95 Standard masks of Petitioner impairing general public and consumers from purchasing the said protective N95 masks in the market. IPAB concluded that the word ‘N95’ is a generic term also by acknowledging the fact that it a knowledge not invented today but into use since 1970s.

Further, in this case, the question points directly to the Trade Mark Registry as well which allowed the registration of a mark ‘N95’ to the single entity under Application No. 4487559 at first glance. Online facts on the site of Trademark Registry states that there was no mark cited in the examination Report as well. Interestingly, I also found that there are other five application filed for registration of the mark N95 in class 10 which are at the stage of objection. Yet, I am still counting on the possibility that why the prospect of generic nature of a mark was not risen at that time that too in this present Covid time for N95. Also, as per section 2(1) (e) of the Act which defines Certification Mark which in this case, the mark N95,under Certification mark, could have been considered which is granted only to a compliance agency and not to a person (discussed in Chapter IX of the Trade Marks Act) Interestingly, USA filed for this certification mark only on 17th June, applied by U.S. Department of Health and Human Services under Application No. IRDI-4783107.Concluding on the point, that though IPAB passed the interim order on stay of any sell of the goods under Application No. 4487559 for N95 after considering N95 generic, the problem is ultimately solving the issue of generic mark at the stage of Prosecution itself also keeping in mind that a generic mark can be protected until and unless if the mark use is extensive and is only associated the Proprietor. Also, any sort of issue regarding the sale of N95 without ISI mark will not be resolved until and unless the government also passes any Indian Standard to match the standard and quality.

Rajshree Chaudhary is an Associate at Y.J Trivedi & Co. She holds B.A.LLB (H) degree from faculty of law, Maharaja Sayajirao University, Vadodara. She primarily focuses on Trademark Opposition and Rectification department of the firm. She has assisted in the Hearing matter at Ahmedabad Registry and also for IPAB. She is also into writing Legal Notice and Agreements for the firm.