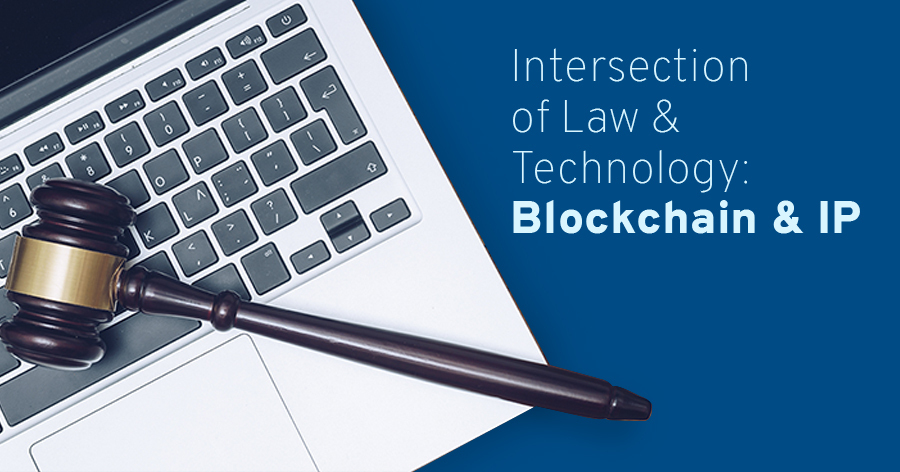 Law and technology go hand in hand, apparently when a new technology is developed the law ensures the protection of it. One can surely connote both having an asymptotic relationship. Blockchain-AI convergence is inevitable. Blockchain validates secure storage and sharing of data whilst, AI can analyze and generate insights from data to generate value. In this digital age, replicating a digital photograph or copying content from the internet is easy, but working out whether or not a digital content/photo is the original or just a copied version is the tangible question. Blockchain spurs IP by providing a way for protection and by allowing developers to create unique digital assets that cannot be replicated. Blockchain technology is progressively being applied to new applications in IP-heavy industries, brand protection and enforcement, marketing, customer engagement and so forth.

IP and Blockchain have dual relationship. On one hand, IP system protects blockchain and on other, Blockchain technology can be utilized to strengthen the IP regime. There are manifold prospects in regard with the usage of blockchain technology for the management of IP rights. This profoundly new technology can effectively turn IP rights into “smart IP rights” by recording the same in a distributed ledger by replacing the traditional database. It focuses upon creating an immutable record of chronicle of a registered IP right comprising of the details from the first application of a trademark to its registration and usage in trade, also when a design, trademark or patent was licensed, assigned, and so on. The potential to track the complete occurrences of a right has multiple benefits, including smoother IP right audits and simplified due diligence exercises in the context of IP transactions. Further, it could also be used in connection with ‘certification marks’ to certify that products meet certain established standards. Another aspect under the purview of IP rights, smart contracts could be used to establish and enforce IP agreements, such as licenses, and allow the transmission of payments in real time to IP owners. Blockchain technology could re-equip creators in respect of remuneration by acting as a platform for creators and distributors of IP. Game companies that publishes different games on Xbox Live entered into licensing agreements with Microsoft in which, by writing the transactions to a blockchain transparency is improved, and publishers can access data almost in a short time and because of the same, there’s a diminution in the time taken to reconcile royalties between Microsoft and the publisher. This could have a massive impact on IP rights management in the digital environment by making the process more transparent and efficient, and cutting out financial intermediaries. However, some of the issues such as the required processing power of blockchains, compatibility, legal issues such as data ownership, privacy, liability, jurisdiction etc. yet remain unsolved.

Within the context of unregistered IPR like copyright and unregistered design rights, Blockchain technology is paramount since it can provide evidence of their conception, use, qualification requirements and whether the right is still in the period of protection. Each creative work is provided with a unique cryptographic identity which is verified with a blockchain solution.

A Patent is an IP right for a technical invention and falls under the auspices of the Indian Patents Act, 1970. The blockchain patent applicants will need to demonstrate novelty and an inventive step with due contemplation. The blockchain patent applications needs to be drafted meticulously to ensure that the claims cover patentable subject matter, keeping in mind the exclusions on patenting business methods and computer programs.

Certainly, Blockchains are append-only ledgers, as the information can only be altered in exceptional circumstances. Even the third parties could use the blockchain to see the complete chain of ownership of a work, including any licenses, sub-licenses and assignments. However, so far blockchains have their bounds where more complex issues such as legal assessments become necessary. That could include the evaluation of whether the developed subject matter actually complies with the desired research results envisaged which needs interpretation and where the role of Lawyers becomes significant.

In summation, Industry 4.0 and the technologies that come with it are still advancing. It is eminently clear that the Blockchain has the potential to be an enormous boon to the IP industry and is propitious for the world that certainly demands greater transparency and accountability. However, major courts can allow blockchain as evidence, yet the presence of IP experts is still imperative for legal matters and examinations. As much as the growing use of bitcoin will not replace traditional financial institutions, equivalent for blockchain use in the IP world. Blockchain can be entitled as an advanced way for protection, management and monetizing IP thus, both systems can intersect and complement each other.