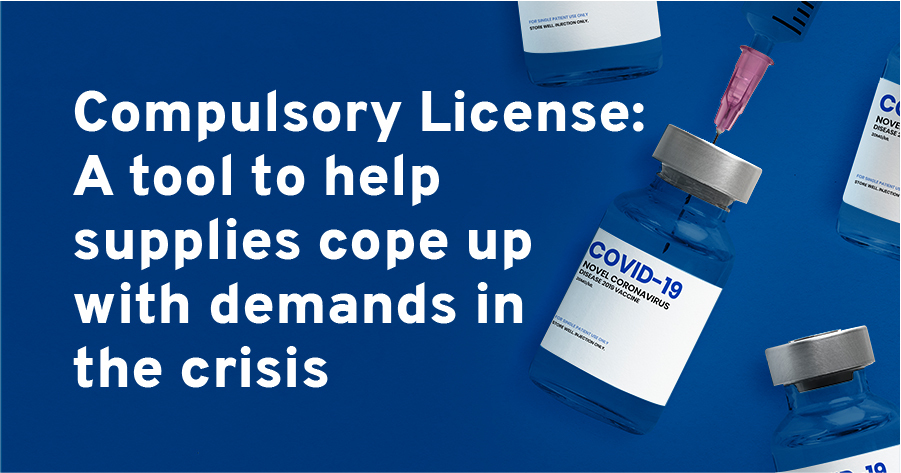 Compulsory License: A tool to help supplies cope up with demands in the crisis

In April, 2021 India got hit by the second wave of Corona Virus spread leaving lacs of people in its wake. For the past few days India has been reporting about 4 lac new cases every single day according to the government figures. With the current surge in Covid-19 cases there has been a critical shortage of supply of Covid-19 drugs. Compulsory license can be seen as the only and most efficient strategy to meet the paucity of Covid-19 drugs.

In the light of said circumstances Natco Pharma Limited has filed an application, under section 92 (1) and 92 (3) of the Patents Act 1970, before the Controller of Patents seeking Compulsory Licences for the drug “Baricitinib”. Section 92 of the Act gives the Central government power to issue compulsory license in case of “national emergencies”, “public health crises” and “other circumstances of extreme emergencies”. A lot of countries took towards compulsory licenses in the first wave of Covid-19 pandemic in the year 2020 to meet out the insufficiency of drug supplies.

Compulsory license enables the pharmaceutical companies to manufacture the patented medicines in order to meet the high demands of the hour and not only the rate of production but also the cost would also be much more affordable for the larger public good. Further, the Supreme Court has also showed its inclination towards invoking the powers with respect to Compulsory License for the drugs which are used for the Covid-19 treatment. The Court also suggested taking recourse under section 100 of the Act which gives power to central government to use inventions for purposes of government. In fact, India was the first country ever to issue compulsory license in the year 2012 to produce life-saving drug for kidney cancer and interestingly, Natco Pharma was the one seeking for it at the time as well.

In October 2020, India and South Africa had already approached WIPO for waiving off Trade related Aspects of Intellectual Property Rights (TRIPS) on Covid-19 vaccines so as to inoculate the same worldwide. And just about today, the US Government has also announced its support on easing trade rules so that the high production of life-saving vaccines could be enabled. The current situation of India and some of the other countries and further the fact that the said virus is mutating clearly indicates the world needs to be prepared for its next Corona Virus hit or wave and that is why it is really important for the countries to come to consensus for the same. There are countries which are against the said waiver as it will lower their incentive which simultaneously will affect their investments into research and development which again is very crucial in order to deal with the mutating virus.

Compulsory License cannot always be seen as an entire loss as the pharma companies do get reasonable advantage in the form of royalties for its patent rights and given the fact that such license’s duration is limited to the purpose fulfilment for which it has been granted, incentive would not suffer for a longer period.

The Patent Act, 1970 provides with the provisions of section 92 and 100 to deal with the ongoing crises of Covid-19 drug supplies. As extraordinary situation demands extraordinary actions, the current events are apt for granting of compulsory license under section 92 of the Act in order to tackle current critical period. These unprecedented circumstances are one of the reasons behind the making of said provisions so that the state could take immediate actions in the wake of “public health crises” or “other epidemics” such as the instant Covid-19 pandemic.

Jahnvi Yadav is an Associate at Y. J. Trivedi and Co. She holds a Bachelors's degree in law from the Institute of Law, Nirma University. She works in the Opposition department of the firm and handles the Trademark Opposition, Trademark Rectification and Patent Opposition matters. Additionally, she also drafts Agreements of varied nature.