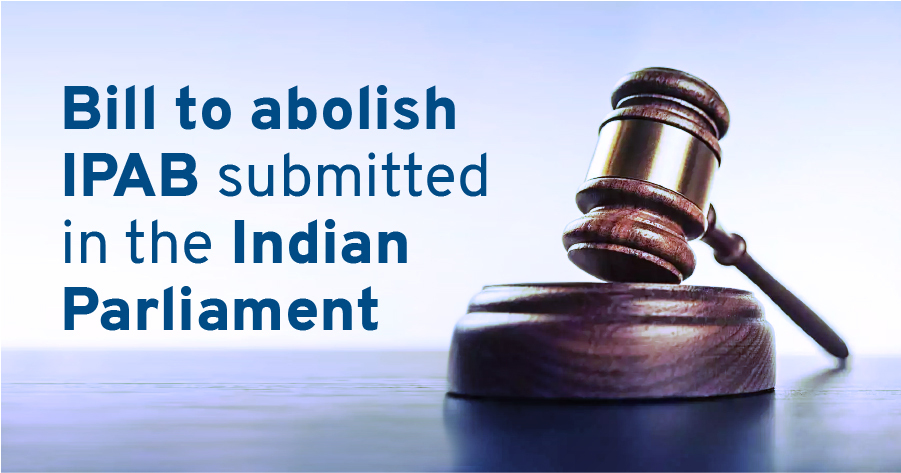 Bill to abolish IPAB submitted in the Indian Parliament

On 13th February 2021, the Government of India introduced a bill in the Lok Sabha that was titled as the Tribunals Reforms (Rationalization and Conditions of Service) Bill, 2021. Through the introduction of this Bill, the Government is seeking to abolish various tribunals (including the Intellectual Property Appellate Board) and transfer their functions back to the country’s High Courts. The introduction of the said Bill was quite unprecedented and sudden as it was introduced in the Parliament without consultation with the public and the relevant stake holders i.e. IP practitioners, attorneys and advocates.

The Intellectual Property Appellate Board (IPAB) was formed in the year 2003 with an objective to hear appeals against the decisions of the Registrar under the Trade Marks Act, 1999 and the Geographical Indications of Goods (Registration and Protection) Act, 1999. Subsequently, in the year 2007, the Ministry of Commerce & Industry announced that Patent Appeals pending before the various High Courts, will stand transferred to the IPAB. Likewise, fresh Rectification Applications under the Patents Act, 1970, will also have to be filed before the IPAB. Subsequently, even matters pending before the Copyright Board were transferred to the IPAB for adjudicating. Thus, ample powers were granted to the IPAB to adjudicate multi-disciplinary matters relating to Patents, Trademarks, Copyrights and other Intellectual Properties.

It is to be noted that one of main objectives of forming the IPAB was to achieve effective disposal of IP matters and because they often involve technical issues, a board/tribunal comprising of technical members can effectively dispose-off such matters.

Role of IPAB in the field of Intellectual Property:

The IPAB has played a pivotal role in determining/rendering decisions to complex issues involving Intellectual Property Rights. These decisions have gone on to be landmark decisions in their respective fields, a few examples are as under:

These are just a few instances of how IPAB decisions have impacted the IP regime in India. It is fair to say that the IPAB has proven its worth and has indeed contributed in speedy and effective hearing and disposal of matters.

Today India is among the top 50 innovative countries as per the Global Innovation Index 2020 and it is a known fact that intellectual property spurs innovation. Dismantling the IPAB will not only adversely affect the IP regime but it may also have an adverse effect on the innovation environment as right holders will not have a streamlined mechanism that ensures security of their rights.

Today when the world is looking at India to be a top player in Innovation and Intellectual Property, it is only befitting to have a framework that is both, effective and speedy.